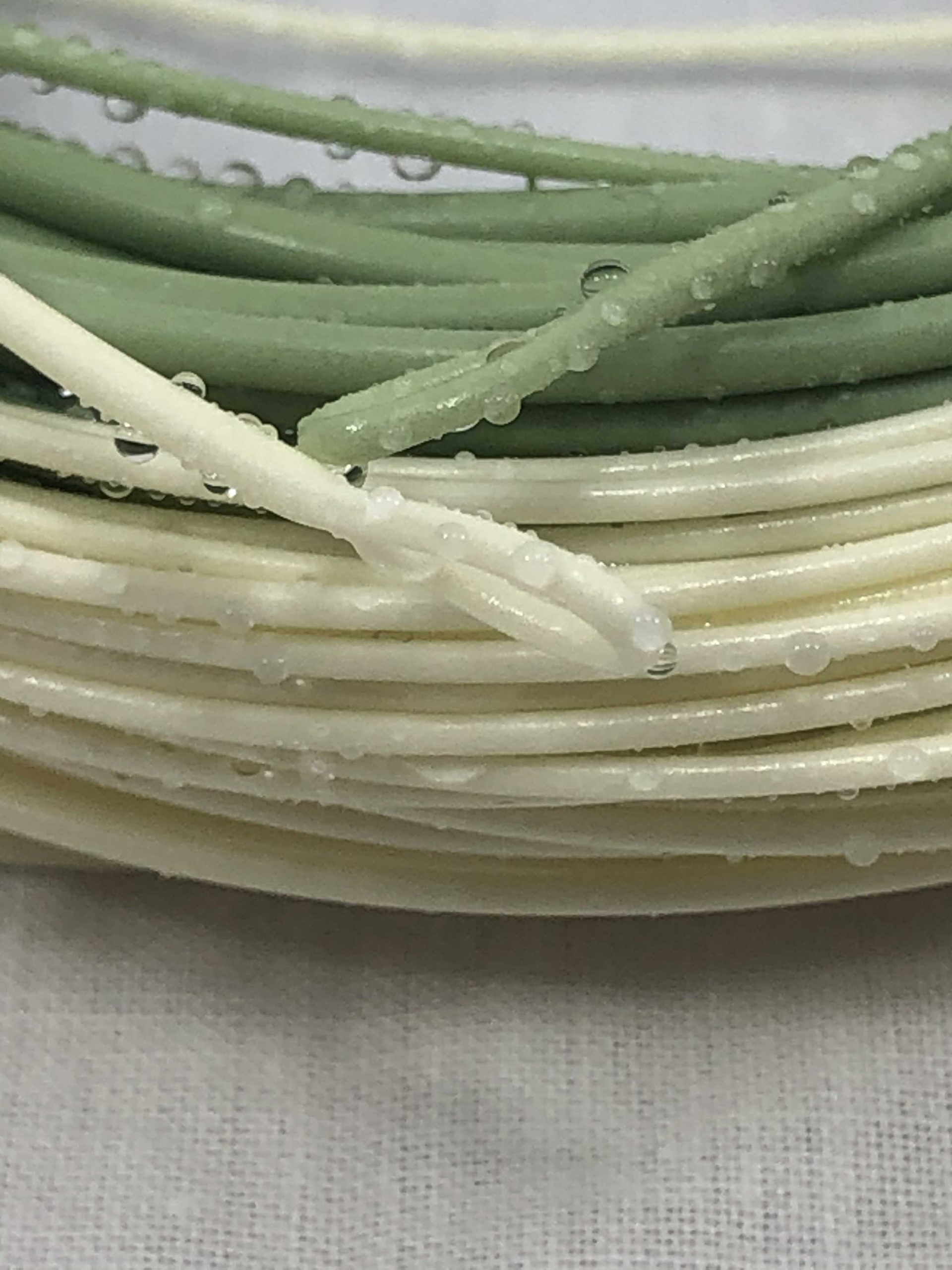 A couple of people had told me about a fly line that has a very aggressive front taper with most of the weight right up front which will load your rod really quickly, I thought I’d give them a go & paid only £20 each. Another bonus is that the line is a two-tone/colour line which has a cream colour for the running line & a moss green head. I find 2 tone lines better to coach with as gives clients a visual point that needs to be airialised.

So far, my pike fly lines seldom last a whole winter, most need a new welded loop 2-3 times through the winter or like my last winter’s line which broke the outer halfway on the head just 2 weeks to the end of season! Now I was not sure if a cheap line would really last the season & didn’t fancy getting caught out; so, I ordered a 2nd spare line “just in case”.

A side note on product testing, I never treat gear with kid gloves! I fish winters in the Anglia Fens an average of two times a week & several weeks up to three times with each session can be 4-8 hours long. So to say that my gear gets used quite a bit.. would be a good statement & to the point that my rod never sees the inside of its rod tube for 6 months solid!

So back to the line, It arrived coiled up in a bag with a couple of pipe cleaner ties to keep the coils in place. I spot that there are welded loops which is a must for my style of fishing as it makes life so much easier to hot swap leaders/traces with loop-to-loop joins. It also means that I can re-weld a new loop if it degrades & starts to hinge the cast. I set to connecting the new line to my backing using the welded loop, I then start to unwind the fly line on the floor. I do this by using my hands (reverse roly-poly almost) to turn the whole coil feeding out the line, as I do this, I take a step back & after 5-10 mins I have fly line leading down the hallway floor. I set to winding the line on to my reel, as I get near the head of the line, I can see the difference in thickness & the obvious aggressive weight forward front taper.

My first day out with the line was an eye-opener, once I had pulled off the reel the line I needed; I set to my 1st cast. Holly s**t this line is fast & I double haul which comes naturally to me. The fen drain I am on is only 13M (44 ft) to 16M (51ft) wide, I always start my “fan” cast on my left margin & each cast is 2-4ft further out as I work my way round to the right margin. On several occasions I had too much line out for the dead ahead cast, the fly line shooting so fast for me to grab it to stop it as I realised what was about to happen & piled my fly into the opposite bank/reeds! The water Gods were looking after me as each time this happened, I managed to get my fly back without snagging it!

The line does what it says on the tin! It WILL load the rod quickly, as I got used to the lines shooting speed; I found I was only needing 2 false casts for short casts, 3 for further & up to 4 in windy conditions (wind speeds up to 40mph!). I tie my own pike flies with the average fly in my box 6-8” long in a variety of baitfish & bulkhead patterns. The longest fly I have & cast with this line is 14”, this line handled all of them just fine; great turn over.
The widest Fen water I fished with this line was 21.5M (71ft) with a few sections wider, I was able to cast within inches of the opposite bank with ease.

Finally, it happened!.. I was fishing low n slow & hit a snag. I thought it was a pike strike & “set the hook”…. After a few split seconds I realise the line is not moving = not a fish 😭
I waste no time in reeling in all my loose line & attempt to bully the fly free using the rod alone (as well do to start with). Nope that didn’t work, right time to force a break off! I still had the full belly of the head out over the water, I know full well forcing a break can overstretch a fly lines coating causing it to micro-crack (this has happened to my last 2 fly lines from more well-known brands). But with no choice I wrap the fly line around my hand/wrist/arm, rod tip pointed at the snag & start to step backwards. I run a 25lbs leader with 28lbs wire trace all loop to loop connected, 5-7 paces later something finally snaps. I check my line for damage, I know that true damage won’t show its self-straight away; so, a mental note to check it over the coming weeks. I check the welded loop, which is still intact with no damage, the break off was at the leader loop knot. I remove the leader & put a fresh one + trace on. Last few winters I have had to break off 3 times & this past winter was no different! 1 tree, 1 opposite bank & 1 monster pike… I mean sunken tree root!
Two occasions I was fishing in -3C temperatures with a wind chill of -8C, I had wiped my rod guides with Silicone grease which did actually stop them from freezing up! The fly line felt gritty after a few minutes which I realised was ice forming on the line as it left the water heading up my rod but did not affect how well it cast. The line stayed supple; it did not stiffen up in colder temps.

As the months wore on & nearing the end of winter season, I checked the line for the micro-cracks that I was expecting to see as I hit the same amount of break offs as past winter lines. I saw no cracks on the belly or running line, the welded loop is still the same one; previous lines I had cut & re-welded a new loop 2-3 times through the winter.

I have lent my rod to friends or recommended this line to others; I keep hearing the same thing from people who use this line. They love it! Casting became much easier, less tiring on a long day & improved casting for a couple of people as well. Fish (pike) of a 1,000 casts more like 300 casts!!

The line is great for how much it costs, I never did need that spare line. Loads the rod in 2 casts, makes casting easier, handles big flies just fine, handles windy conditions, cold temperatures & best bit? Only cost £20 (at time of writing this). The line is also cold Saltwater rated, I don’t fish the salt so that side of things I can’t comment on