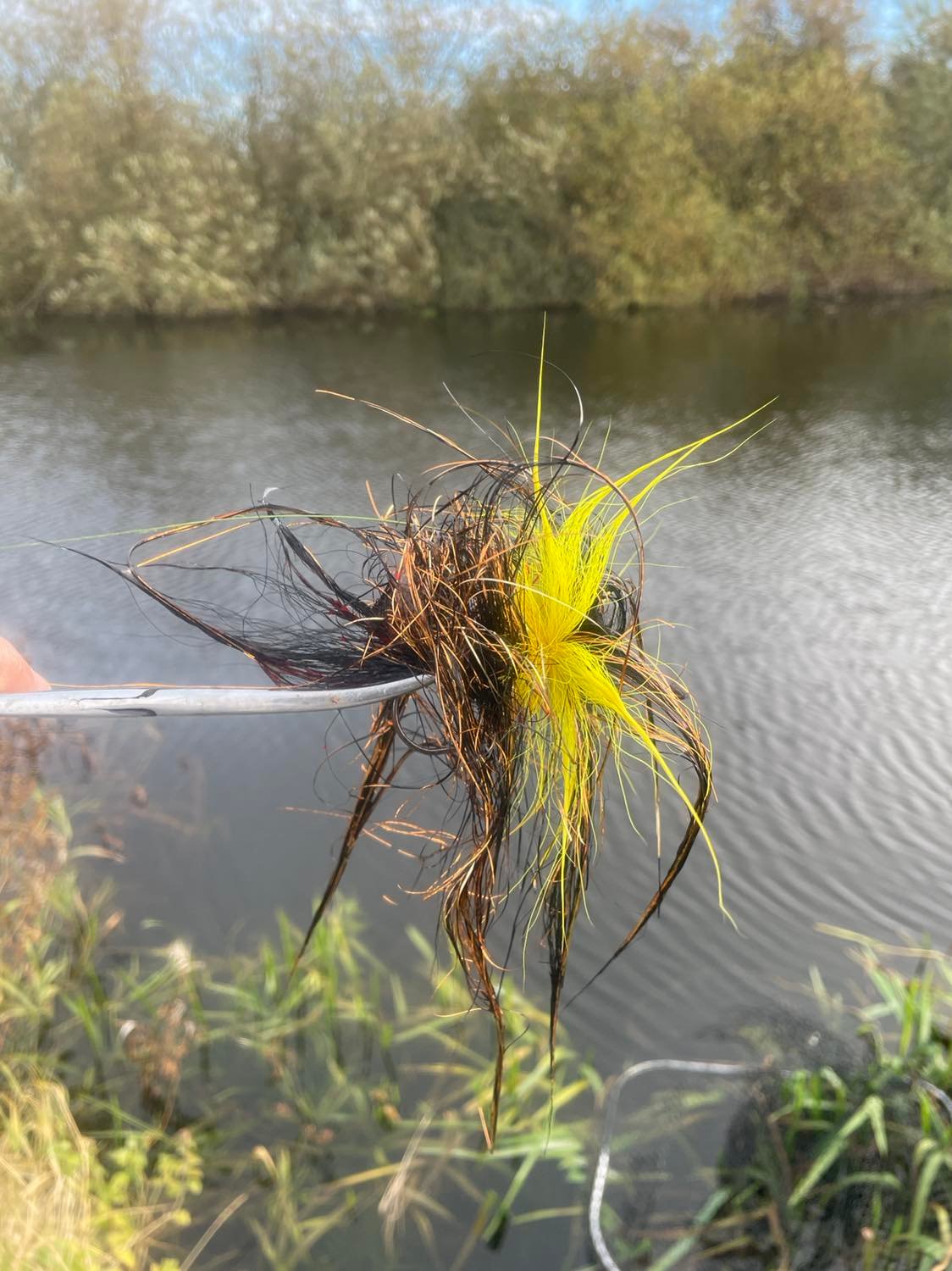 This weekend is a busy one for me, 4 days fly fishing for pike!

Day 1, Friday. Woke up to a decent frost on the ground which means more of the water weed & bank growth will die back making it easier to fish/cast. I decided not to start fishing mid morning 9.30am as I seldom get takes at first light, instead I see takes start around 2 hours after first light; so thats when I like to start fishing.
I stood at my first spot with trepidation as the last several weeks have seen so many pike take and spit my flies, something that it seems to have been happening to a lot of people over the same several weeks; so at least I knew I was not alone! Cast out with my trusty Mega High Speed WF10F (Click HERE to open the link to fly line) with a Scruffy Tiger pike fly, this spot is known to be a good spot producing several fish…. but when they are hungry! Sadly not this time, Its odd really as although this spot is where I like to start my day at this venue; I actually wanted to fish another section altogether! So I headed off to the other section which has a very nice deep and wide section.
I get to my second spot to see that the water has risen 2ft from the last time I was there, not put off as this actually opened up a few spots that I didn’t fish before as reaching the water to release pike safely was a challenge. Still with the Scruffy clipped on I get to work casting, retrieving different speeds each time to see whats working and hitting the jackpot with a slow retrieve with a couple of pauses. As I was retrieving slowly, I first thought I had snagged the bottom, after a couple more pulls I feel it again and decided to strike just in case; lifting my rod and feeling nothing. Fly still had several meters to go so I just carried on my retrieve and when the fly was almost under my rod tip I spotted the follow! The pike then lunged for my fly, took the whole thing leaving nothing showing; I quickly went to set the hook with lifting the rod for the pike to only spit the fly… My heart sank, was this going to be yet another one of those days?! I swapped the fly to a sparsely dressed/all flash pattern I call flashy Perch, cast out with the same slow retrieve and BANG! another take, but THIS TIME I kept my rod tip down and stripped several times HARD. This is the strip strike and this time the hook found home! A nice 8Lb pike graced my net and I am sure some passers by thought I was a nutter as I celebrated jumping in the air with a fist pump! If only they knew the frustrations I have had the last several weeks! After unhooking/resting, this Jack swam out the net strong and I set to checking my trace for damage. Finding none I set to casting again, something I usually do is move to the next spot as have found not likely that more fish will be in the same area. But this time I stayed put but cast several meters downstream with the same slow retrieve, I felt the take as a soft bump and started to strip hard several times again. Pike number 2 slid in to my net, only a small mid single fish ; I set to getting it unhooked and back. I didn’t take any photos of this one.

Things went quiet after these two and I started to work my way downstream, each new spot I change the speed of my retrieve as fish at the new spot might want things differently to the previous one.
After walking/casting a mile down stream I decided to head back to the spot I had fish from earlier, it was around 2pm when I got back to the spot. I am testing an intermediate WF10 fly line and I wanted to see how it would cast and fish, the spot I was at is quite deep so I knew it was an ideal line to use. I clipped the Tinsel town pike fly (Click HERE to open a link to the fly) on and cast out, I stuck to the slow retrieve and felt a take on my 2nd cast. Strip, strip, STRIP and Esox on! Fish landed quickly, unhooked, photo with a quick weigh saw it swimming off to ponder what the hell just happened 🤣 I cast back out but in a different area to before with a curve to bring the fly up the margin on my bank, as I was about 5 meters away from the rod tip I was startled by a broad, long pike flashing away from my fly! One of a few things I love about pike fly fishing, every trip these fish make me jump! I should expect them to do this, but when it happens it still surprises me! I cast back out to where the fish had headed but had no luck, time to change fly which is a tactic I do use when a fish has followed but not taken on 2nd (or 3rd) attempt.
Having tested out the swimming action of a Reaper fly I had tied earlier in the week on my floating line and it was doing exactly as it should; kicking out side to side and materials puffing up as it kicks out. I wanted to see how it would perform on an intermediate line I am testing, quick swap of spools, clipped the Reaper back on and cast out. Feeling the extra drag as I retrieved which I expected as this is a bulkier fly than the others in my stripping tray (story for another day). Cast out to where that fish I had my last follow headed, With just 1/4th left to go, I spot the Reaper in the depths heading towards me and getting ready to start the “hang” before my next retrieve. I spot something moving fast from my right heading straight for the reaper and whoooosh, the Pike nailed my fly! This fish put up a good fight diving deep several times, my rod bent right over to stop the dive and soon glided in to my net.

Today I am happy, the weeks long episode of every trip seeing my fly spat as fast as it was inhaled if finally over! Weather wise today was beautiful, started out cold and frosty; warmed up with a slight breeze. A good day to be out on the bank enjoying nature and fresh air. Day 2 of this weekend I’ll be fishing with Rodney Weivel who created the Scruffy Tiger pike fly which has seen so, so many fish to nets all over the country by many anglers. I do plan to stock this pattern once my supplier has them available.